11 fun facts about the magical canals of Amsterdam

Here are 11 facts about the magical Amsterdam Canals:

Fact 1: Amsterdam is the most watery city of the world

No, not Venice, but Amsterdam is the most watery city of the world! Almost a quarter of the city is covered by water – canals and harbours have been a central part of life in Amsterdam for hundreds of years and continue to be an integral aspect of every true Amsterdammer’s life today. That’s why a trip to Amsterdam is not complete without an Amsterdam boat tour through the canals.

During the Dutch Golden Age (spanning the 17th century) most of the Amsterdam canals were built. Here, Amsterdam Canal History becomes intertwined with the wider history of the Netherlands and the industrial, social and economic revolution that took place during this time was fuelled by the increased levels of trade, commerce and exploration made possible by what was to become the world’s greatest port city. 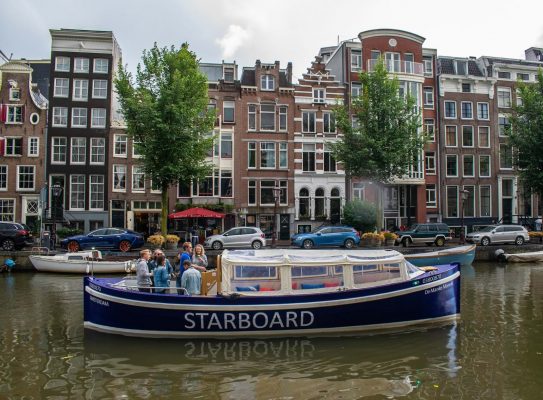 Fact 3: The historical canals in the city centre are part of UNESCO World Heritage

The Amsterdam Canals that form the so-called ‘Canal Belt’ (much of the city centre) joined the UNESCO World Heritage Site List in 2010. This well-deserved recognition of this part of the city’s contributions to global history helped to put this cityscape of incredible waterways on the world map.

You read that correctly! One of the most impressive facts about the Amsterdam canals is the huge amount of them. Imagine all the digging that was done to get the beautiful Amsterdam canals to where they are today – and remember that, as this task was undertaken hundreds of years ago, it was all done by hand. Next time you’re enjoying a beer on a canalside terrace, stopping for a selfie by a bridge or enjoying a boat cruise along one of our beautiful waterways, take a moment to think of the men who built them – and be grateful that you weren’t one of them!

Whilst Venice is home to 409 bridges, Amsterdam almost triples this number. With an incredible 1,281 bridges, Amsterdam beats the Italian water capital with ease and therefore is well-deserving of the title “Venice of the North”.

Fact 6: Over 2500 Floating Houses are located on the Amsterdam Canals

Living next to the canal not quite close enough? Since the 50s, Amsterdammers have moved as close as possible to living in the water without getting wet! 2,500 unique houses floating right on the water have gone from affordable housing for poor city dwellers to some of the city’s most sought-after real estate! Enjoy a glimpse into the lives of the locals on our boat tour.

Fact 7: The most famous bridge of the Dutch capital crosses the Amstel River and is called the Magere Brug (red. Skinny Bridge)

This charming bridge has nine passages and was built in 1737. The story goes that the iconic bridge was built by two Dutch sisters who lived across the river from one another in order to visit regularly! Truth or myth? Find out on our Boat Cruise! This bridge is also one of the main attractions of the Amsterdam Light Festival 2019.

Fact 8: The canals separate the city of Amsterdam into 90 different islands.

Although Amsterdam is one city, in many ways it is more like a man made archipelago! The islands vary in size hugely, with some of them being little more than a cluster of houses and others being home to thousands of people from all over the world, like Ijburg!

Fact 9: In 2012, the Queen of the Netherlands jumped into the canals for a dip!

Although the canals are not known for their cleanliness, Queen Maxima once participated in the yearly charity fundraising event called the ‘Amsterdam City Swim’. She completed the 2028-meter course in only 50 minutes, proving her sporting credentials!

Fact 10: The Amsterdam Canals are full of bikes…

Despite the royal seal of approval, we don’t advise anyone to do a casual canal swim themselves. Each and every year, about 15.000 bikes end up in the canals. A special boat was designed to collect the bikes from the water, something of an attraction itself, and fishing for bicycles became a full-time occupation for the city!

Fact 11: The canal ring is one of the wealthiest neighbourhoods in Amsterdam

Since its construction many centuries ago, the canal belt has been home to some of the wealthiest and most influential people in Dutch society. Most of these houses were built during the Dutch Golden Age when merchants made the most of the plentiful money brought to the city by the economic boom. This period was the greatest era for the Dutch, due to their advancements in world exploration and economic progress. Even today, this part of the city is considered the wealthiest neighbourhood and, although many of these houses are now occupied by companies rather than merchants, there is an enormous amount of prestige in living in the canal belt. The most expensive building put up for sale this year was a spot right on the Keizersgracht with an asking price of almost a million euros!

has been – and still is – one of the richest neighbourhoods of Amsterdam and attracts wealthy homeowners. The most expensive building for sale in the city this year was an office at the Keizersgracht, with an asking price of almost 10 million euros!

You might have previously been wondering why Amsterdam was such a sought-after travel destination for visitors (besides its famous Red Light District and coffee shops) and why a canal cruise is the most popular activity amongst tourists in the city. Well, know you know! And if you want to see all this and much more for yourself, by booking one of our ​private boat tour​s around the canals, you know where to find us! Book now!